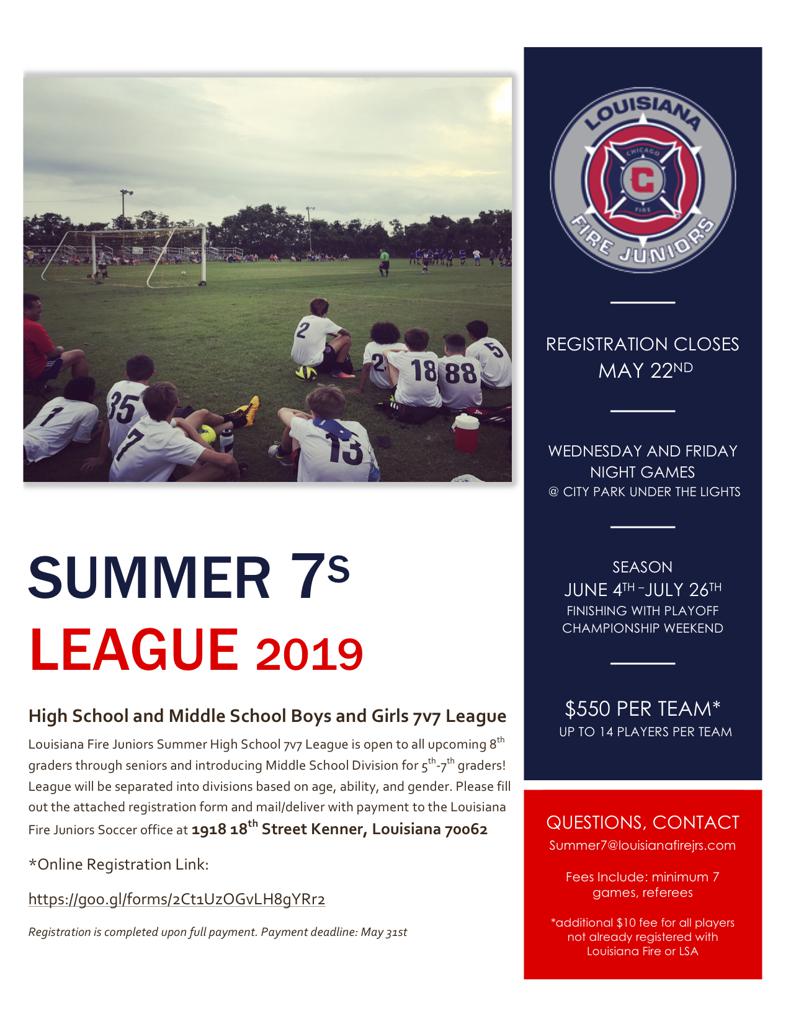 No, each team must provide their own uniforms. If there is a uniform color conflict on game day, the away team must wear the practice bibs provided at the field.

Do we need their high school coach?

It is not necessary for each high school team's coach to participate; however, each team will need an adult moderator on the sidelines in the event of injury or incident.

If my child is in 8th grade, can he play with his 9th grade friends?

Yes, each team will be placed in the appropriate division based on the average skill and age of the entire roster. It is not a requirement that each team be only 8th grade, 9th grade, 10th etc.

My child's school is not fielding a team. Can he play with his friends from another school?

Yes. We would like each team in the league to represent the high school they attend, but we understand this may not be possible for some players who are interested in playing. We are encouraging all players to find a team or put their own team together. If single players are having trouble finding a team, please email Summer7@louisianafirejrs.com

Games are played with six field players and a keeper; minimum number of players on the field is five. Each team must provide referee with a typed roster before the game with the player’s names and associated numbers. Coach’s names must be on the roster. Maximum roster size is 18 players. Maximum game day roster is 14 players in one individual game.

Substitutions allowed on the fly. Subs must stand at midfield before entering the game. Players are required to step off the field before the sub steps on. All subs must exit and enter within 5 yards of each other at midfield. Players entering or exiting illegally will result in an indirect free kick from the center of the 3-line in the guilty teams half of the field.

Shin guards are MANDATORY and must be completely covered by socks.

Home teams (listed first on schedule) are required to wear pennies if primary colors conflict (no shirts vs. skins).

The game will have two 25-minute halves with a 5-minute halftime. Offside does not apply. In case of a tie, game will finish as a tie. A forfeit will be awarded if the opposing team is not ready to play (cannot field the minimum # of players) within 5 minutes of scheduled start time. The schedules will not allow for grace periods longer than 5 minutes. There will be no grace period allowed if each team has a minimum of 5 players at scheduled start time.

A player is guilty of a 3-line violation when he/she passes, throws, or kicks the ball across 3 lines in the air towards the opponent’s goal without touching or having been played/touched by another player on either team. An indirect free kick will be awarded to the opposing team at the spot where the ball crossed the 3rd line or at the closest location behind the line to where play can be started.

In order to keep all games competitive and maximize the utility of playing time for individual players, upon a goal scored that increases one team's lead to 4 goals, the team scored on may play with an additional player on the field until the goal margin is reduced to -3. If teams are shorthanded on the day and unable to add a player, the team with the 4 goal lead must remove one player until the lead is reduced.

All direct and indirect fouls apply. Opposing players must remain at least 5 yards from the ball.

Once the keeper HAS CONTROL of the ball, they have 6 seconds to put the ball back in play. Failure to do so will result in an indirect free kick. Keepers may not throw, punt, or drop kick the ball over three lines.

3-line violation applies for throw-ins. Keepers may not play throw-ins from their team with their hands.

Goals can be scored directly on corner kicks. Opposing players must be at least 5 yards away.

USSF rules apply. PLAYERS EJECTED FROM A MATCH WILL BE SUSPENDED FOR AT LEAST THE FOLLOWING MATCH. Ejections for fighting or any other actions deemed violent may result in suspension from any further play. Should a player accumulate two yellow cards in one match, their team will play down one player for the remainder of that match. The offender will also be suspended for the following match. Offensive language can also be a send off.

A player cautioned or yellow carded at any point in the game must be replaced by a substitute immediately to serve a 2-minute time out period off the field. The player may return to play after the 2-minute period by regular substitution.

All suspensions are given though the disciplinary board process.

One referee will be assigned to each match.

Check Louisiana Fire Juniors website, www.louisianafirejrs.com for updates. The game will be rescheduled if lightning strikes prior to the conclusion of the first half. If lightning strikes in the second half, the game is terminated and deemed final.